Skip to content
FREE SHIPPING ON ORDERS $20 AND MORE

Covid versus the career woman

COVID versus the career woman

The other week I shared my labor story, and I am thrilled about the response I received. It made me so happy that it resonated with so many of you. Although this week was supposed to be a continuation of my story with the postpartum madness, I am going to pause that due to a worrying article I read the other day.

According to a handful of sources, last month more women left the US workforce than men. What’s upsetting is that just this January women had outpaced the number of men in the workforce. To add to the sadness the number now resembles how many women were in the workforce in the mid-1980s.

While some women left the workforce due to the collapse of female-dominated industries such as retail, hospitality, and education, others left due to the difficulty of managing work and family life, they simply got burnt out. Additionally, almost 47% of the women who left are women of color. All these numbers are extremely worrying.  And while some may believe this is a temporary glitch, I am not so sure. If this shift becomes the new normal, my concern is that progress will not only be erased but our voices and needs as women will become a void again.

Women are the spenders in the economy. We are the decision makers. But with few women in executive roles, products marketed and developed don’t always have a complete understanding of our needs. Take for example the industry I am in, beauty and skincare. Majority of the c-executives are men, only 29% of senior level jobs are dominated by women, hence marketing ads and products still feel from a male perspective.

This sings even more true when it comes to products. For example, after giving birth I found pumping worked the best for me when having to feed my child. But being a career woman, I had to multi-task while I pumped. I bought a pump and the hands-free bra. It did not work for a multi-tasking, working mom like me. Although my hands are free, the pump is so big I couldn’t pump AND hold the baby when he cried. The people who designed the pump assumed that the only women using the pumps would be moms who pump at the office. But that is not true, even moms at home pump, which means when the baby cries you got to pick him/her up. This is just one example. We can’t have female consumers with male leaders.

I strongly feel the loss of women in the labor market could have been better mitigated or limited by two simple factors.

Eliminate the pay gap between men and women. Women are often seen as the second earners in the family, and also tend to have a lower pay than their husbands. So, when a situation like the pandemic arrives and the support system has been removed, as in no help from day-cares, friends, family or school, the burden falls on the woman to give up her earnings to keep the household running. The situation is even worse for single-mothers. If a woman earned the same amount as a man, one would think the situation wouldn’t have a simple answer. However, this is not always the case, hence the importance of mitigating factor two.

An evolution of society views. Women are still not seen as equals to their male counterparts. The wage gap showed that, but the pandemic showed that even more. Even in households where men and women earned the same salary, it was women who had to take full ownership of the house and children. It was simply assumed. According to the McKinsey and Lean In report, only 44% of mothers polled said that they were splitting household responsibilities equally with their partner versus 70% of fathers who said they were doing their fair share. I personally know of a few families where this occurred. The woman had to switch to part time or even consider completely giving up her career to manage everything, even though she was a senior executive and made the same earnings has her husband. Why, if when earnings are of equal amount, it falls on the woman to give up her career? On the other hand, I saw other families where the role was split, even if the earnings were not equal. For example, in my family, my husband definitely earns more than me, however, he sees the importance of me having a career. So instead of me quitting or putting the business on hold we spilt our time. We both worked and cared for the baby. 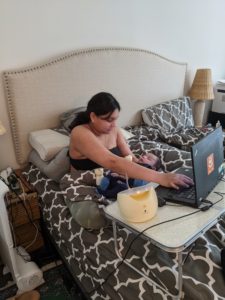 Although it is women who give birth, men often forget that the child is OURS; caring for the baby is both the woman and the mans’ job. When speaking to other couples, this was a strategy other family adopted. But the families that adopted it successfully, were able to do so because the men truly saw their wives and partners as complete equals. It wasn’t about the wage gap it was about seeing the opposite sex as an equal.

So, while the wage gap will help, it is important for us women to be seen equally now more than ever.

Did you give up your job or consider it due to the difficulty of managing family and work? Id love to hear your story.